Definition: What are the Phalanges (Phalanx) of the Finger

The tubular bones forming the fingers and thumbs in human hands are known as phalanges (singular term: phalanx) [1]. These are commonly called digital or finger bones [2].

What Type of Bones are the Finger Phalanges

The phalanges of the hand are classified as long bones [3, 4].

How Many Phalanges are There in the Hand

Where are the Phalanges Located

Located within each digit, above the metacarpals, these are the terminal bones (located farthest from the center of the body) of the upper limbs in humans [6] You can feel the phalanges within your fingers and thumb, with each section of a finger having one phalanx.

Names of the Phalanges According to Location

Proximal Phalanges: Located at the proximal end, articulating with the metacarpals [6].

Middle Phalanges: Located in the middle, between the proximal phalanges and distal phalanges. The middle phalanx is not present in the human thumb, which only has a proximal and a distal phalanx [7].

Distal Phalanges: The most terminal of all the phalanges, located at the end of the digits in hand [8]. 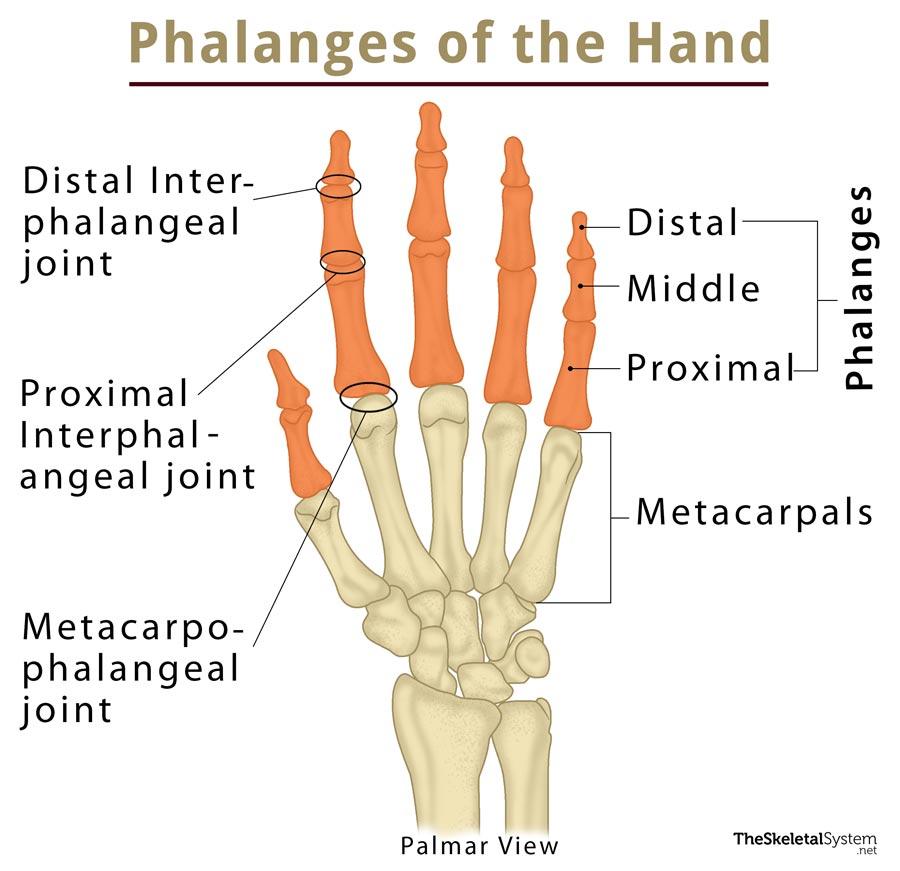 Anatomy of a Phalanx

Parts of the Bone

Like the metacarpals, each phalanx can be divided into three sections [9]:

Interphalangeal joints form the knuckles of hand [12] and are a simple form of hinge joint in the human body [13]. 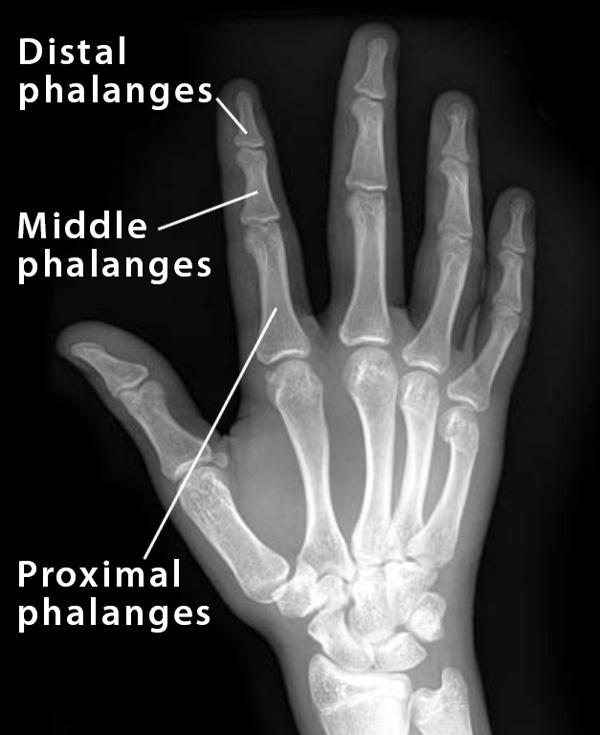 Each phalanx has two centers of ossification, the first one for the body or shaft, and the second for the base or proximal extremity. The shaft starts to ossify quite early, around the eighth week of fetal growth.

Among the bases or proximal extremities, the base of the proximal row is the first to begin ossifying between 3 and 4 years of age, with those for the middle and distal rows following a year later.

The base and shaft unite with each other when one is eighteen to twenty years old [14].

Functions of the Phalanges

The phalanges play a vital role in the movement and flexibility of digits, as well as the whole hand. These bones allow us to flex and fold the fingers and thumb to hold or pick something up, and carry on all daily activities like using a phone, typing, eating and so on. The phalanges also create insertion points for various muscles that help with the flexion of the fingers and hand [15, 16].

Fracture and dislocation: These are the most common forms of injury to the phalanges, occurring due to direct stress or a blow to the hand, often during an accident or because of overuse. The knuckles are most frequently hurt. A fractured phalanx may also be associated with an injury to the ligaments, tendons, fingernails, or some other soft tissues [17].

Phalangitis: A relatively rare condition characterized by infection, and inflammation of these bones, joints, or the surrounding soft tissues. Treatment may include medications, splints, injuries, and surgeries, depending on the severity of the condition [18].

Short, underdeveloped, or hypoplastic phalanges may occur due to some birth deformity or genetic abnormality and are often associated with some multisystem disorder or other serious conditions.