What is the Proximal Phalanx

Where are the Proximal Phalanges Located

As the name suggests, they are the proximal row of the phalanges, located nearest to the metacarpals in the human hand [2]. 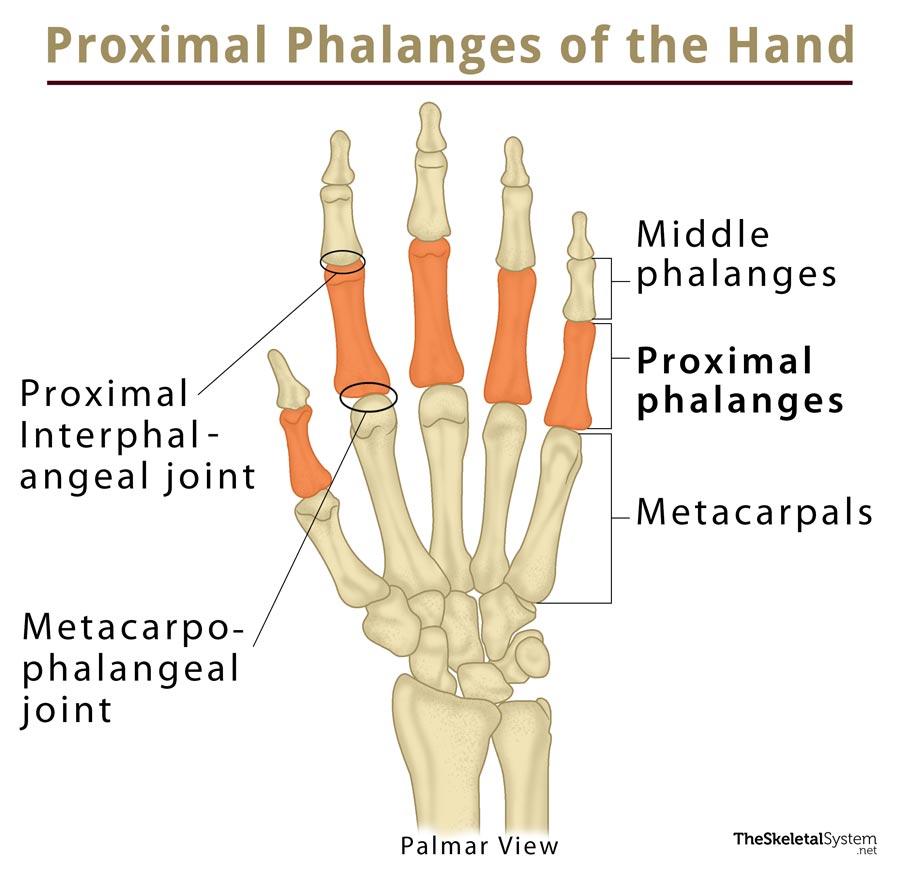 How Many Proximal Phalanges are There in the Hand

There is one proximal phalanx in each finger (including the thumb), which means there are five proximal phalanges in each hand,  a total of ten in both. These are sometimes specifically referred to as the first (thumb), second (index finger), third (middle finger), fourth (ring finger), and fifth (little finger) proximal phalanx.

The ossification center for its body or shaft begins to develop around the 8th-9th week of fetal development, while the second center, for the base, ossifies when a  child is around 3-4 years old [3]. The proximal phalanges are the first among all the phalanges to begin developing the base. 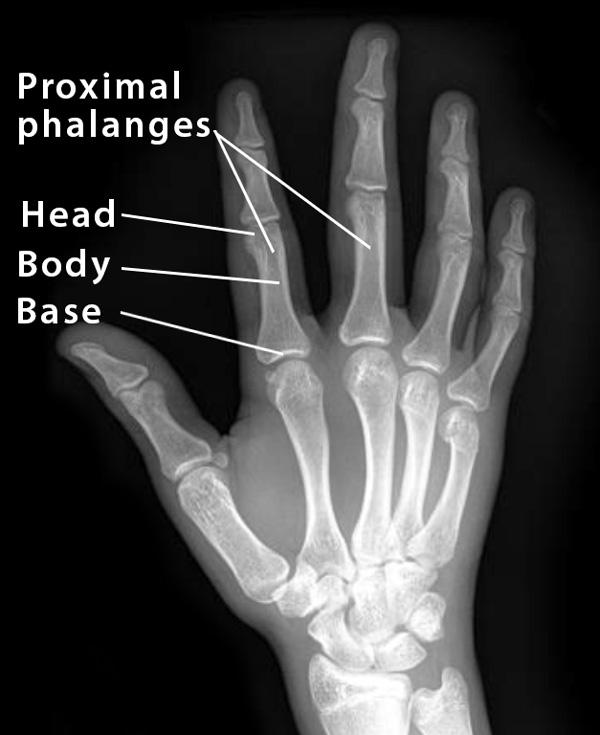 Anatomy of the Proximal Phalanges

Surfaces and Joints of the Proximal Phalanx

Metacarpophalangeal (MCP) Joint (between proximal phalanges and metacarpal bones): The proximal end or base of these phalanges has an oval transverse articular facet for the head of the corresponding metacarpal [1]:

The two creases on the upper palmar side of the finger when you move down from the fingertips are the MCP joints.

Proximal Interphalangeal (PIP) Joint: On the distal end, or head of a proximal phalanx, there is another articular surface for the base of the middle phalanges [1]. However, the thumb is an exception, as it doesn’t have a middle phalanx, so the proximal phalanx head directly articulates with the distal phalanx [4]. On the palmar side of the hand, the crease in the base of each finger (right where the fingers are attached to the palm) is the PIP joint.

Surfaces for Muscular Attachments: Their long shafts are quite flat on the palmar side, but convex dorsally and transversally. Additionally, the medial and lateral borders have distinct sharp edges. This characteristic surface allows the fibrous tendon sheaths of the flexor muscles to attach to the proximal phalanges [1].

Branches from the superficial palmar arch and deep palmar arch are the primary source of blood supply in this area [5].

Being the first row of finger bones, the proximal phalanges play the vital role of connecting the upper parts of the fingers with the palm, allowing us to use our fingers for almost all daily activities. The proximal metacarpophalangeal joints are a key part of the knuckles in human hands.

Proximal Phalanx Fracture: Proximal phalanges are among the most commonly fractured hand bones, and are more likely to get injured than the middle phalanges [6]. Moreover, treating these fractures can be quite challenging due to the presence of the two important joints (MCP and PIP) nearby, along with the passing of vital long tendons [7]. The PIP joints are especially vulnerable to injuries. Treatment may include casting, splints, medications for pain, and surgical intervention (in severe cases) [8].

Dislocation of the Proximal Phalanx: The dorsal side of the proximal interphalangeal joint is the most commonly dislocated site in the finger. These can occur due to accidents and due to any activity but are commonly caused by sports injuries. Treatment usually involves splints and medications [9].

Arthritis of the Proximal Phalangeal Joints: The MCP joints are mostly affected by arthritis among the two proximal phalangeal joints, with the index finger and thumb MCP joints being more at risk for being under most stress from hand activities like pinching. Like most other forms of degenerative arthritis, pain is a common symptom of MCP joint arthritis. Treatment usually includes anti-inflammatory medicines, reduced activity of the hand, splinting, and heat treatment [10].