The skull is one of the most vital bony structures of the human body, as it houses and protects the most important organs, including the brain. There are 29 bones (including the hyoid and middle ear bones) that comprise the skull and give shape to the head.

The skull is divided into the neurocranium and the facial skeleton.

Names, Anatomy, and Structure of the Bones in the Skull

The cranial bones are:

The frontal, occipital and parietal bones form the cranial roof, while all six bones contribute to the cranial base.

The bones in the canial roof articulate with each other via sutures, with the most significant sutures of the human skull being formed in this region.

The cranial bones, especially those forming the cranial base, connect the lower part of the skull to the rest of the body through articulations with the facial bones, the mandible (temporomandibular joint or TMJ), and 1st cervical vertebra. The frontal bone forms the superior part of the bony orbits or eye sockets.

When looked at from the inside, there are three large subdivisions or fossae – the anterior, middle, and posterior cranial fossae. 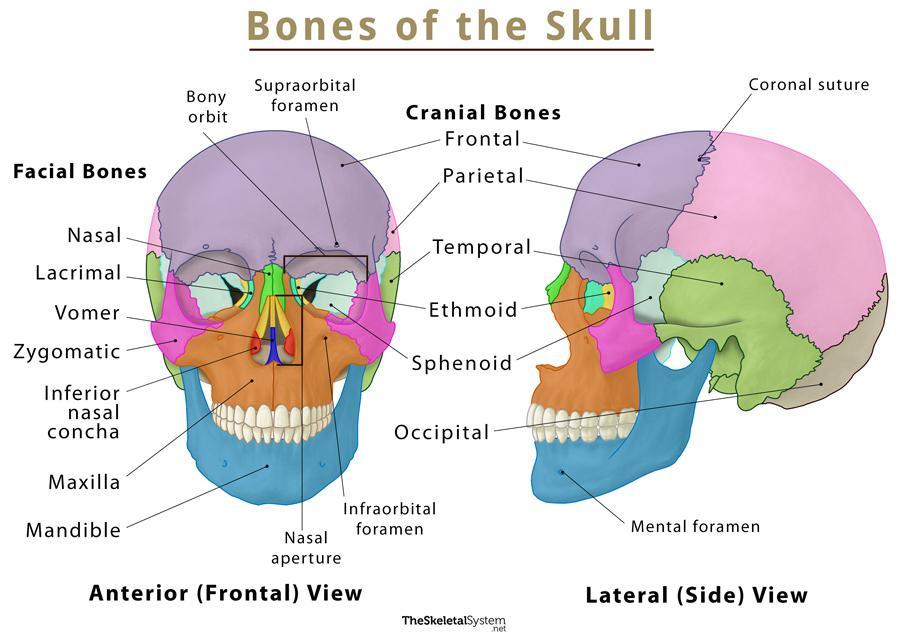 The facial skeleton, also known as the viscerocranium, comprises 14 facial bones (2 unpaired and 6 paired). Together, these bones structure our face, cheeks, nose, mouth, and jaws. Here are the bones in the facial skeleton:

Here, the hyoid bone, and the ear ossicles (middle ear bones) are also included in the facial bones. The three paired middle ear bones are malleus, incus, and stapes. Apart from forming the face, these bones are responsible for protecting and supporting the soft tissues in the area. The maxilla occupies most of the front part of the facial skeleton and forms the boundaries for the nasal aperture with the two nasal bones. The zygomatic, lacrimal, palatine, vomer, nasal bones, and the inferior nasal concha form the rest of the orbits.

Sutures of the Skull

Sutures are a unique type of fibrous joint that connect the skull bones. These joints allow for movement during infancy, so the brain and skull can grow. These joints fuse and become immovable around the age of 22-24.

As mentioned above, the three primary sutures in an adult skull are the ones between the cranium’s frontal, parietal, and occipital bones:

In newborn babies, multiple soft spots or gaps exist between the skull bones due to the partially joined sutures. These gaps are known as fontanelles, with the frontal and occipital fontanelles being the most important ones. The soft spots gradually hardens and disappears as the sutures fuse in adults.

The cranial base has multiple foramina and other openings to allow passage to the spinal cord, blood vessels, and cranial nerves. Here are the names of some of the most important foramina, along with the nerves they allow passage to: 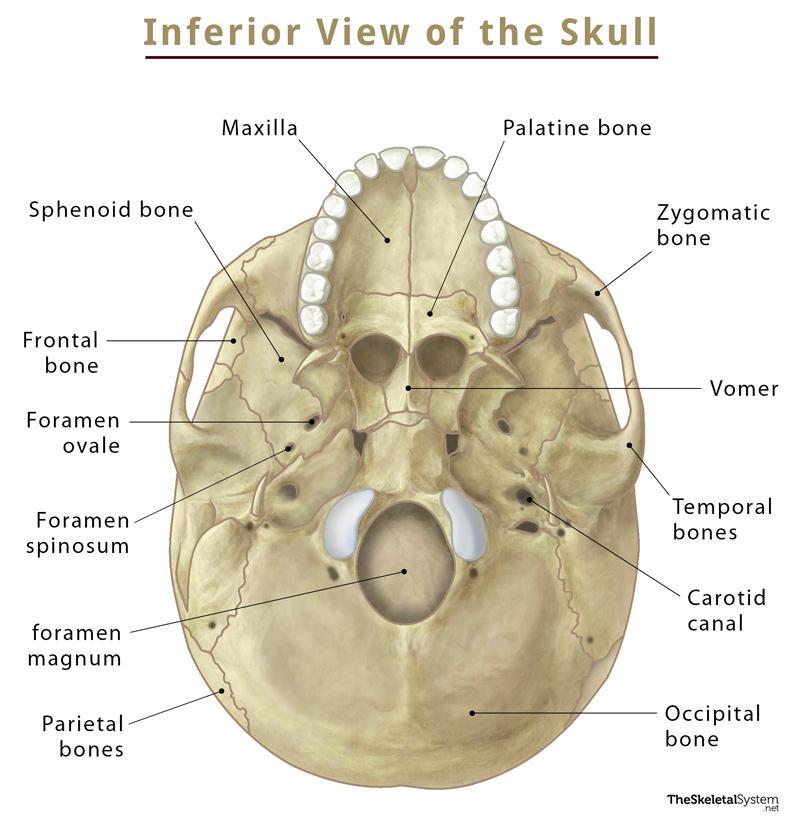 Inferior View of the Skull

The skull primarily gets its blood supply from the common carotid artery, while the vertebral artery also contributes.

The scalp and face muscles are innervated mainly by the facial, oculomotor, or trigeminal nerves. The hypoglossal nerve innervates the tongue. These muscles are responsible for everything from facial expressions, talking, and eating to lifting or lowering our eyebrows and moving our eyes to see.

Q. Do skulls have bone marrow?

Ans. Yes, skull has bone marrow. Recent studies have found that the skull bone marrow is directly connected to the brain through special openings.

Q. What is the only movable bone in the skull?

Ans. The mandible or jawbone is the only movable bone in the skull.

Q. What bone protrudes at the base of the skull?

Ans. The occipital bone protrudes at the base of the skull.

Q. How thick and hard is a human skull

Ans. A female skull is slightly thicker than a male skull, with the former being 7.1 mm thick while the later has a thickness of 6.5 mm.When it comes to the hardness of human skulls, it can withstand a pressure of around 6.5 GPa. To compare this with some of the hardest objects, concrete can withstand 30 GPa, while steel up to 200 GPa.