What is the Middle Phalanx

A middle phalanx (plural: phalanges) is one of the long tubular bones found in the fingers [1, 2]. It may also be referred to as a medial phalanx or intermediate phalanx. Like the rest of the phalanges, each middle phalanx has a head, body/shaft, and base.

Where are the Middle Phalanges Located

As the name suggests, the middle phalanges are the middle row of finger bones located between the proximal and the distal phalanges [3]. 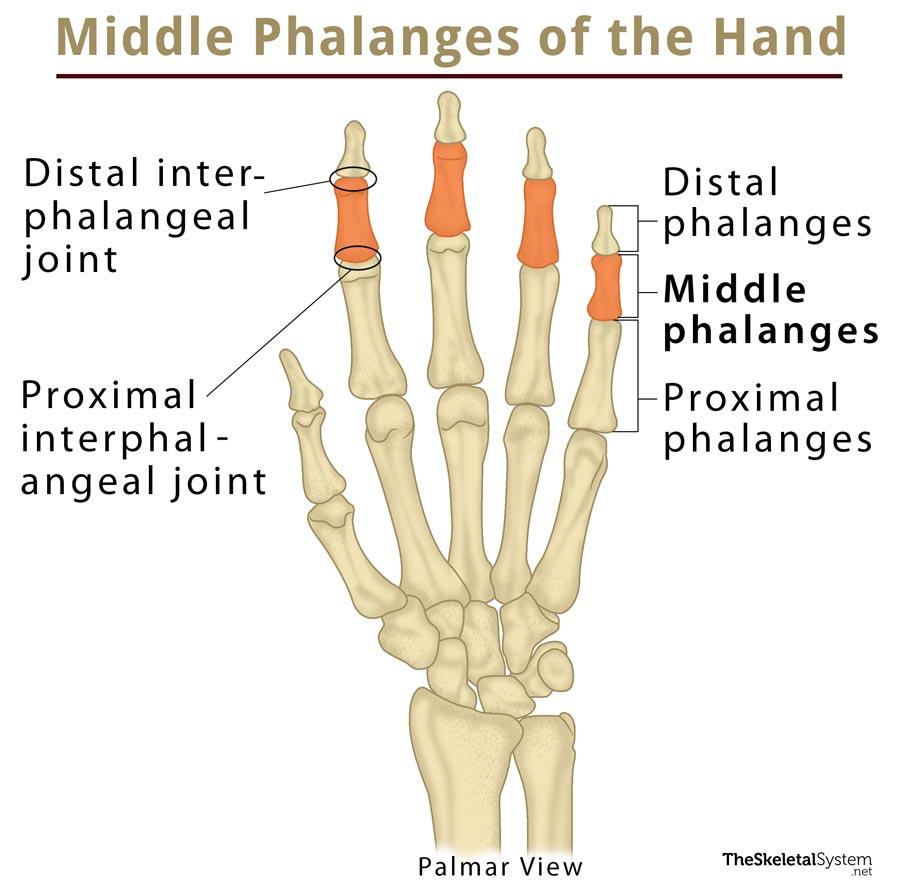 How Many Middle Phalanges are There in the Hand

Each finger has one middle phalanx, except the thumb, meaning each hand has four of these phalanges, and there are eight in total in both hands. The thumb only has one proximal and one distal phalanx [4]. The four phalanges may be referred to as the index finger, middle finger, ring finger, and the little finger middle phalanx, according to the finger they are associated with.

Anatomy of the Middle Phalanges

Surfaces and Joints of a Middle Phalanx

Proximal Interphalangeal (PIP) Joints (between the middle and proximal phalanges in each finger [6]) — The base of each middle phalanx has two concave facets, with a smooth ridge separating them, for articulating with the head of the proximal phalanx [7]. This joint is marked by the second crease in each finger when you move down from the tip or fingernail. However, this joint is missing from the thumb as it only has two phalanges [8].

Distal Interphalangeal (DIP) Joints (between the middle and distal phalanges in each finger) — The middle phalanges have a pulley-shaped facet on their head to articulate with the distal phalangeal base [7]. Like the PIP joints, the thumb does not have any DIP joint either [6].

Branches from both the superficial palmar arch and deep palmar arch supply to the middle phalangeal area [10].

Functions of the Middle Phalanges

Having two interphalangeal joints on either side, the middle phalanges are instrumental in allowing the fingers to bend in two points. This enables us to carry out all the daily functions of the hands and fingers with precision [3]. It is also important for any side to side grip, like when holding something between your finger (e.g. when smoking a cigarette).

Fracture and Dislocation: Middle phalanx fractures and dislocations are not as common as those of the proximal phalanx [11]. These may occur most commonly from sports injuries, but may also be caused by some other trauma or accident.

Arthritis: The PIP and DIP joint arthritis are associated with this bone, with the index finger joints being more prone to these due to its use in almost all hand functions, especially for pinching things [12]. Treatment may include splints, anti-inflammatory medication, reduced hand movement etc., along with surgeries for severe cases.

Other conditions commonly affecting the DIP joint include jersey finger (a common sports injury), mallet finger ( abnormality occuring due to damage to the extensor tendon responsible for stretching the fingers), and mucous cysts (small fluid-filled sacs on the fingers, that are often painless) [12].