Metacarpals Definition: What are They

The metacarpals are a group of bones in the human hand, between the wrist and the finger bones [1]. These bones are classified as long bones, and together, they are called the metacarpus, forming the palm of the hand [2]

How Many Metacarpal Bones are there in the Palm of Hand

There are five metacarpals in each hand, with each bone being associated with a specific finger [1]:

Where are the Metacarpals Located

The metacarpals are located between the distal carpal bones (trapezoid, trapezium, capitate, hamate) and the proximal phalanges (the lowest of the three bones forming each finger) [2]. They can be felt on the back of the palm, below each finger [2]. 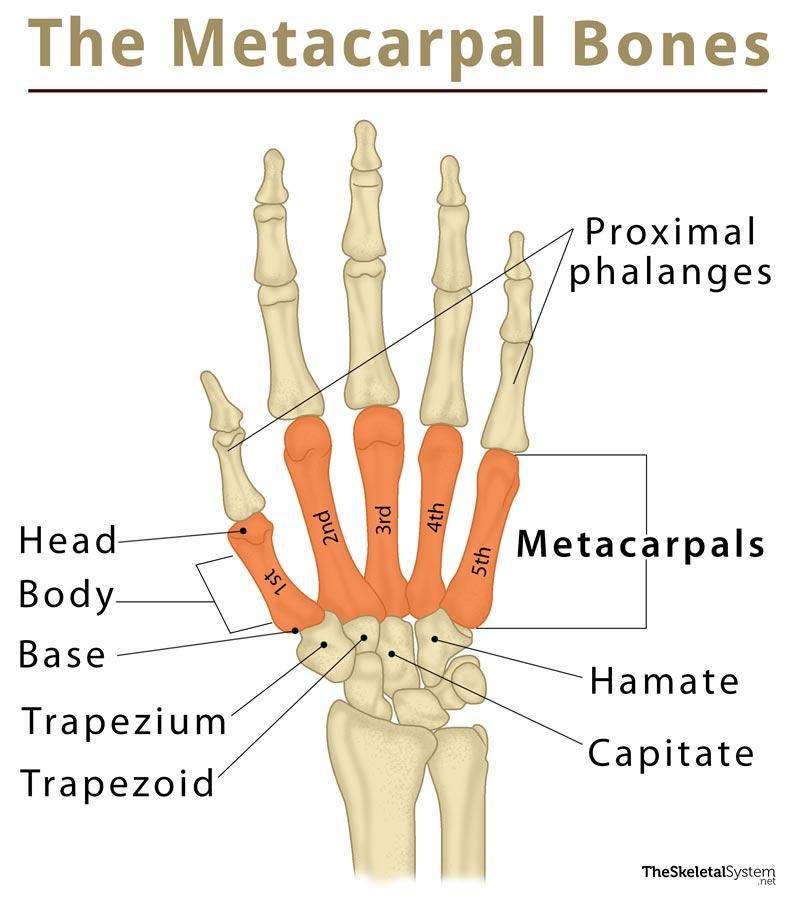 Anatomy of the Metacarpals

Parts of a Metacarpal

Each of these long bones can be divided into three parts:

Metacarpal Head: The rounded distal end (the upper end on the side of the fingers) [3]. The area right below the head is referred to as the neck of a metacarpal.

Metacarpal Body/Shaft: The long part between the head and the base; the metacarpal shaft has a concave palmar aspect, and sides. On its dorsal aspect, there is a triangular area on the distal side [3, 4].

Metacarpal Base: The enlarged proximal end (the lower end on the side of the wrist) [3]; the third metacarpal has a styloid process projecting dorsally, extending behind the capitate [5].

The metacarpals form important joints and articulations on both ends:

Articulations Between the Medial Metacarpals

The four medial (the four except the thumb) metacarpals are joined with each other through articular surfaces at the base, while their distal ends are joined by ligaments. This arrangement forms the hollow of the palm, making it flexible along with the fingers [18].

The joints between the metacarpal and carpal bones are all plane synovial joints, except the thumb as it is a saddle joint (another form of synovial joint) [8].

The five metacarpals form prominent articulations on their base or proximal end, with one or more of the four distal carpal bones [4]:

Palmar Metacarpal Ligaments: Binds the metacarpals and the phalanges [9].

Pisometacarpal Ligament: Binds the pisiform bone to the fifth metacarpal base, which joins with the little finger [9].

Natatory Ligament/Superficial Transverse Metacarpal Ligament: Bind the metacarpal heads together, extending between fingers, just beneath the skin, creating the web spaces of palm [10].

Deep Transverse Metacarpal Ligament: These run across the palmar surface of the hand, from the second to fifth metacarpal head, strengthening the palmar ligaments and stabilizing the metacarpal joints of the index, middle, ring, and little fingers [11].

Muscular Attachments in the Metacarpal Area

Primary muscular attachments in this area include the abductor pollicis longus, opponens pollicis, opponens digiti minimi, extensor carpi radialis longus & brevis, and the extensor carpi ulnaris [4, 12]. These muscles control the mobility of the palm, fingers, and also the flexion of the wrist in the radial and ulnar sides.

Metacarpals Function: What do they do

The basic function of the metacarpals is to act as the bridge between the wrist and fingers, forming the framework of the hand. Together as the carpus, it is the vital part of the skeleton that holds together the small and large bones in the human hand, stabilizing its dorsal and palmar sides [6]. As a result, they play a crucial role in the proper development, movement, and functioning of the hand.

Fractures and Dislocations: These are among the most commonly fractured bones, with car accidents being one of the common causes behind a broken or injured metacarpal [2]. Fractures in specific locations may have specific names, like that of the fourth and fifth metacarpal is known as the boxer’s fracture [19]. Dislocations of the carpometacarpal joints are quite rare, with few medical cases reported. Symptoms of an injury usually include pain, swelling, and inability to move the wrist or fingers [13]. Treatment varies depending on which metacarpal is affected, and nature and location (head/shaft/base) of the fracture [12].

Metacarpal Boss: Sometimes, there may be a bony mass or bump on the back of the hand, around the carpometacarpal joints. It is referred to as a metacarpal or carpometacarpal boss, and is painless unless associated with some other condition. Such bony prominence most commonly occurs at the base of the second or third metacarpal. Treatment depends on the presence of any underlying causes [14].

Carpal Metacarpal Arthritis (First Carpometacarpal Joint Arthritis): Arthritis may affect any of the five carpometacarpal joints, but is more common in the thumb joint between the first metacarpal and trapezium bones. It is characterized by pain at the base of the thumb when gripping or picking something up, or during twisting movements like opening a jar. Treatment may include immobilizing the thumb with a splint along with oral medication, and injection. Severe cases may even need surgical intervention [15].