Definition: What is the Ulna

Ulna (plural: ulnae; pronunciation: úl-nu) is one of the two primary bones forming the forearms in humans, the other one being the radius. There is one ulna bone in each arm. It is a long bone [1] and is vital in the formation of both the wrist and elbow joints [2]. 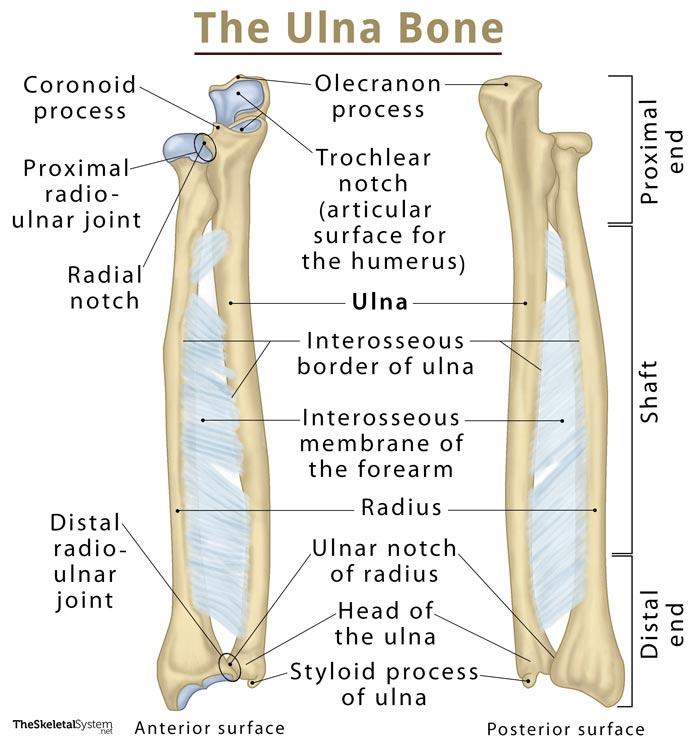 Where is the Ulna Bone Located in the Human Body

It is the medial bone of the forearm, located on the side opposite to the thumb, that is on the side of the little finger, extending from the region of the wrist to the elbow. In other words, the ulna can be found between the proximal carpal row and the upper arm bone humerus, running parallel to the other lower arm bone radius [3, 5].

The ulna ossifies from three different centers, with the primary center for the shaft appearing around the eighth week of fetal life. The secondary centers for the distal and proximal ends appear around 5-7 years and 8-10 years of age respectively. All the centers unite when a person is around 18-20 years old [6, 7].

Anatomy of the Ulna Bone

Different Parts of Ulna and the Joints Formed by Them

The long bone can be divided into three parts – the proximal or upper end, shaft, and the distal or lower end [6].

At the proximal end of ulna, there are four important bony landmarks, the olecranon process, coronoid process, trochlear notch, and the radial notch [7]. Another notable prominence is the tuberosity of ulna.

Elbow Joint: The head of the proximal ulna resembles a wrench, with a wide curved ‘c’ shaped surface formed by the trochlear or semilunar notch along with the olecranon process. The olecranon can be felt from outside as it forms the bony tip of our elbow [8]. The curved or crescent surface of the trochlear notch articulates with the trochlea of the humerus to form the hinge joint of the elbow. During extension of the arm, the olecranon inserts into the olecranon fossa, a deep recess or curve in the humerus, to keep the elbow from extending beyond its 180° range. The ulna is further secured in its place by the coronoid process (the distal end of the trochlear notch), protruding anteriorly to fit into the coronoid fossa, another smaller recess in the humerus, when the arm is flexed [3, 5].

Right below the coronoid process, the rough surface on the anterior side of the ulna meant for muscular attachments is known as the tuberosity of ulna [9].

Proximal Radio-Ulnar Joint: Lateral to the trochlear notch, at the end of the coronoid process, there is a small smooth surface called the radial notch that articulates with the proximal end of the radius to form the proximal radio-ulnar joint, so the radius can rotate around the ulna to maintain the flexibility of the elbow [5, 8].

The upper part of the shaft is somewhat pyramidal in shape, with a curve that makes it convex laterally and on the back [10]. There is a prominent ridge, known as the interosseous border of the ulna, running down the length of the lateral side of the shaft. This is where the interosseous membrane of the forearm, the thin fibrous sheet of tissue that holds the radius and ulna together, attaches to the ulna [5].

Its distal end is much narrower compared to the proximal end, with two primary bony landmarks, the head of the ulna, and a styloid process [9].

The small rounded part on the distal ulnar surface is the head, and it articulates with the cup-shaped ulnar notch of the radius and the triangular fibrocartilage articular disc, a cartilage structure that keeps the ulna from forming any direct articulations with the carpal bones [7, 11]. The alignment of the ulnar head and the ulnar notch allows the distal end of the ulna work as a pivot so the radius can rotate around it in all directions [8].

The styloid process is a small bony protrusion extending from the posterior medial side of the head [7]. This is where the ulnar collateral ligament (UCL) of the wrist attaches [8].

The borders and surfaces of the ulnar shaft are the primary site for muscular attachments to this bone [3]:

Primary blood supply is provided by the ulnar artery, as well as its branch the common interosseous artery, which then further branches into the volar and posterior interosseous arteries, still supplying the ulna [6].

Primary Functions of the Ulna

Proper movement of the ulna, along with all the attached muscles is instrumental for doing anything with our hand, from extending or flexing the arm, picking something up, throwing or holding something to eating, driving, and typing [8].

What are the common injuries and conditions associated with the ulna?

Ulnar fractures are quite common, with the points where it joins with the radius and the fibrocartilage articular disc at the wrist being most frequently injured. Dislocations are also common, especially on the elbow side [14, 15]. Another condition associated with it is the Ulnar impaction syndrome (Ulnar abutment) where the ulna may be longer than the radius on the distal end, causing it to bump into the wrist bones, leading to pain [16].

Which bone is longer − ulna or radius?

The ulna is longer but much narrower than the radius [3]. Though early in life when a baby is only 4-5 months old, the ulna has a 50% larger diameter compared to the radius, it gradually reduces to become half of that of the latter as the person reaches adulthood [3].

What is the ulna length-to-height formula?

The exact length of the ulna varies from one person to another, with research showing a possible correlation between the ulnar length and one’s height (the height of an individual may be estimated by calculating the length of his ulna bone) [4]. This is referred to as the ulna length-to-height formula.