What is the Capitate Bone

The capitate (Latin: Os capitatum) is one of the eight carpal or wrist bones in the human hand [1]. It is classified as a short bone [2] and is the largest of all the carpal bones [3].

The upper part of the capitate (the part toward the metacarpals) is called the head, while the lower part (toward the proximal row) forms the body, with the middle part being referred to as the neck [4]. Due to this shape, it gets its name from the Latin word ‘caput’, meaning ‘head’ [5].

Where is the Capitate Located

It is the third bone from the thumb in the distal carpal row, wedged between the trapezoid (on the radial side) and the hamate (on the ulnar side) bones [1]. The capitate is located right at the center of the human wrist [6].

This bone starts to ossify by the time a baby is 1-3 months old, making it the first carpal bone to become visible on an x-ray [6]. 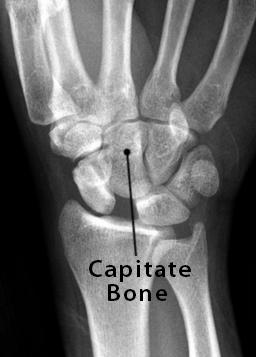 Due to its central position, the capitate articulates with a total of seven carpal and metacarpal bones, namely the hamate, lunate, scaphoid, trapezoid, and the third metacarpal. It also forms small articulations with the second and fourth metacarpals [7].

The medial surface is oval and concave, forming an articulation with the hamate [8].

The proximal surface of the head of the carpal forms a convex facet that fits into a hollow formed by the concave facets of the lunate and scaphoid [1, 7].

The lateral surface articulates with the trapezoid bone [9].

The distal or inferior surface is divided into three separate facets by two bony ridges. The largest of these facets articulates with the base of the third metacarpal, while the other two facets form articulations with the second and fourth metacarpals [4].

The dorsal surface is flattish yet rough, being the largest nonarticular surface [8]

The narrow palmar surface is rough and rounded for muscular and ligament attachments [4].

Sometimes, the wrist may have a radial deviation (in some individuals), which might make the proximal medial border of the capitate to articulate with the triquetrum [7].

The palmar surface of capitate, along with the bases of the second and third metacarpals, is the primary origin point of the oblique head of the adductor pollicis muscle [8, 10]

The radioscaphocapitate ligament attaches with the capitate in a way that it creates a flexible sling that supports the scaphoid [11].

It gets its primary blood supply from the dorsal basal metacarpal and dorsal intercarpal arches. Additionally, the joining points (anastomoses) of the palmar intercarpal and ulnar recurrent arches provide minor, yet important vasculature [7].

Functions: What Does the Capitate Bone Do

It has the highest number of articulations among all the carpal bones, meaning it plays a vital role in shaping the carpal rows and maintaining the movements of the wrist. Since it is located at the center of the wrist, the axis of rotation for any wrist motion will pass through the capitate [12]

The capitate, surrounded by the adjacent carpal and metacarpal bones, is quite well-protected within the carpus, making it one of the rarely fractured bones here [1]. Avascular necrosis, a common condition affecting some of the wrist bones, is also rare in this bone because of its rich blood supply.

Arthritis of the surrounding bones may sometimes affect the capitate, with treatment involving medication, and surgical intervention (in severe cases).